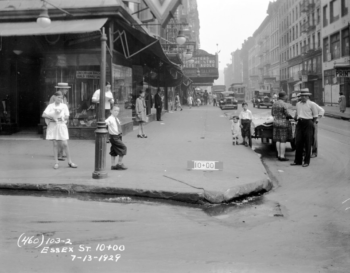 On the corner of Rivington and Essex in lower Manhattan sat a local pharmacy (once a candy shop), that held it’s ground for over 2 decades. It served the residents of the Lower until covid forced its doors closed in late 2020. For the last 5 years, to the casual passersby, the gates seemed to be adorned with legal, cream puff street art, done with permission. But beneath the surface of the colorful mural lies a much deeper explanation, one you wouldn’t know about unless you spoke with those who painted there. Queens Art Collective spoke with Outersource, TurtleCaps, Nite Owl and Belowkey to get a little insight on how they got away with painting these gates with no permission. 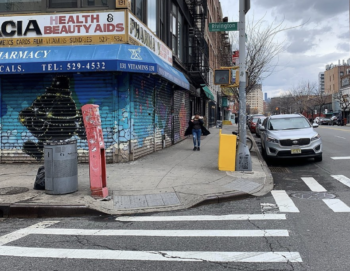 QAC: Rivington and Essex is in the heart of the LES with tons of police patrolling the area and a non-stop flow of people walking by. So you guys painted this location illegally not just once, but twice? Tell us how this all came about.

Outersource: I had been going to the pharmacy for many years and became friendly with the guy that worked behind the counter. The store was closed on Sundays and one day in 2017, I figured what the hell, I’m going to take a shot and just try to paint the outside. It had 5 large gates so I called up TurtleCaps to see if he was down to collab.

TurtleCaps: Funny thing about that… Outer hits me up saying he has permission gates on Essex for Sunday at 1pm. We decided on a space ocean theme and when I arrived, set up my 40 cans and began sketching without a worry in the world. A couple hours in, a film crew visiting New York making a street art documentary, randomly passed by and asked if they could film us. Shortly after they started recording, this old guy walked over taking close up pics of me with his phone. Like 6 inches away close. I thought it was strange, but shrugged it off as some old weird dude trying to get artsy with his photographs.

Outersource: Meanwhile, I’m on the Rivington side working on a space orca, no idea this is going down. 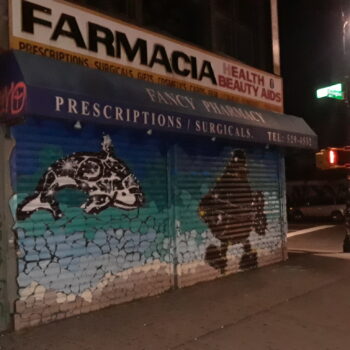 TurtleCaps: So the old guy turns to the film crew and out the corner of my ear I hear him say to them, “Do you feel responsible for this act of vandalism?” Whoa! Wait a second.. I stop painting, walk over to the guy and tell him this isn’t vandalism, we actually have permission to do this. His response was classic. “Really? I’m calling the police. I own this building and you do not have my permission!”

Outersource: I turn the corner, see Turtle waving me over saying this is the building owner. The guy was pissed and starts questioning me hard. So I pulled out a business card I had taken from the pharmacy that I wrote a fake number on, showed the owner and name dropped the guy behind the counter saying he gave us permission. The guy threw his hands in the air and said, “That figures he’s an asshole. You’re lucky I don’t still call the cops on you,” and walked away mumbling stuff.

QAC: That’s hilarious! So you finished painting or what?

TurtleCaps: Yeah, so the gig was up at that point, I realized we didn’t have permission. We waited around a little while to see if any cops showed up, none came, so we went back to painting. Around midnight when we were almost finished, a huge fist fight broke out across the street where 10 kids jumped one guy. They beat him down and dipped right before 4 NYPD squad cars showed up. Of course, one of the cars came over and asked if we had permission. So I turned to the cop exhausted and said, “Yeah man we’ve been out here since 1pm. The owner came by earlier and loved it. We’re doing this just for neighborhood beautification out our own pocket, I’m so tired I just want to go home.” The cop said Ok, I figured as much. Looks great! Keep up the good work, gave me a thumbs up then drove away. 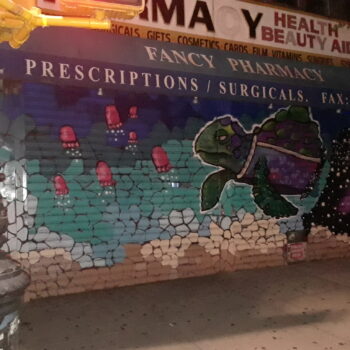 QAC: Wow! Such a good story, the guts it must have taken to sit there and paint such a high trafficked part of Manhattan for 10 hours. 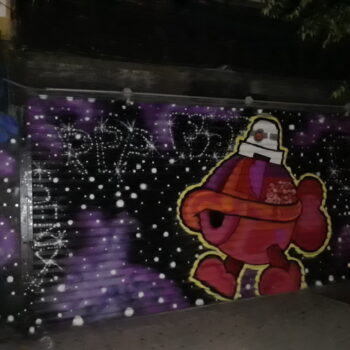 Outersource: We wanted to tell a story with the piece, while taking into consideration the location. Each wall is different and working with the physical space is a big part of it. Considering the neighborhood it’s in, it really is a hot spot, but we pulled it off. We recognized how hard it was, so out of respect we hooked up all the graff writers we went over in the stars of the background. PPP, Sen4, Flash and SN ftr. 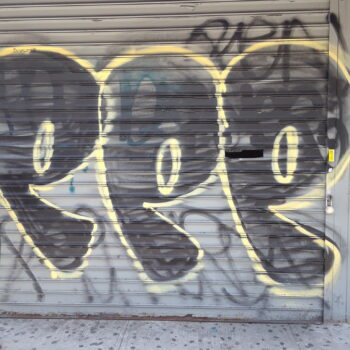 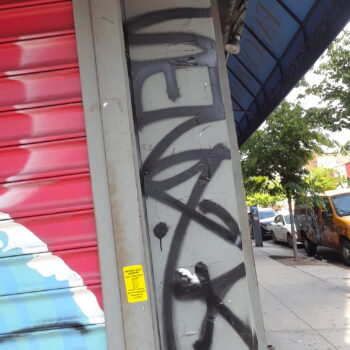 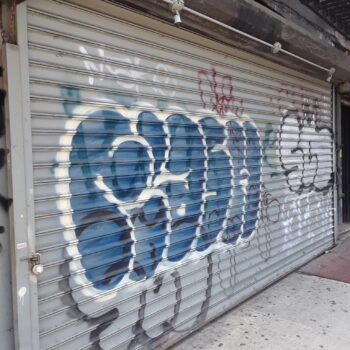 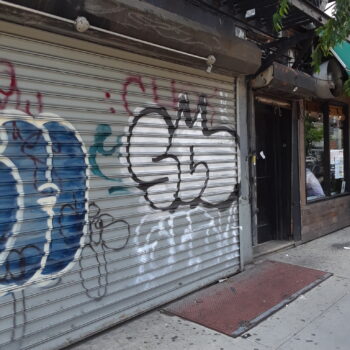 TurtleCaps: For years, all the photographers, writers and street artists thought this was a legal wall, so it’s nice to finally tell the real story behind it. It was a bit nerve wracking to get away with in broad day light, but rewards only come to those that take risks.

QAC: That’s a fact. Now there’s a new mural you guys did there. What was it like the 2nd time around? 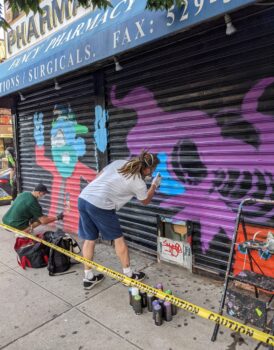 Outersource: Well last year the building got sold and I tried to contact the new owners because all the gates got bombed December 2020 when everybody was wilding out during covid. I couldn’t get in touch with anyone, Nite Owl was in town from Cali and Belowkey was hanging out with TurtleCaps that day, so I called everybody up to take back those gates at 7am the next day. The first time it took the 2 of us a whole day for 5 gates. Second time I figured with 4 painting, we’d get it done much quicker and make a fast getaway. 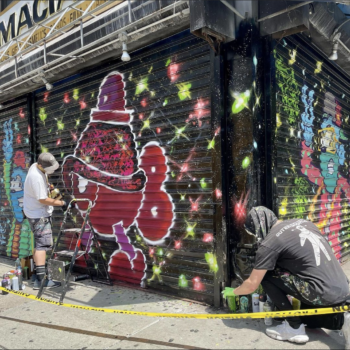 Nite Owl: Yeah, we started mad early, like time to bake the donuts early. I linked up with Silvertunastudios and remember arriving at the spot and just getting right to work. No B.S. just painting away like madmen, completely oblivious to the outside world. Then around 9am I looked over my shoulder and we were surrounded by paparazzi. The word was out. We were taking the gates back!! 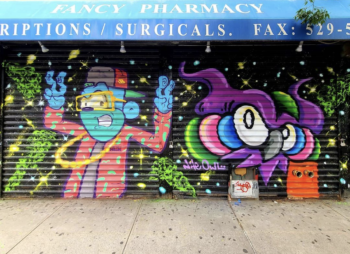 TurtleCaps: Below picked me up and in the back seat of his car were a couple of orange cones he “borrowed” to make it look a bit more legit. I had bought some yellow caution tape the day before to add to the credibility. 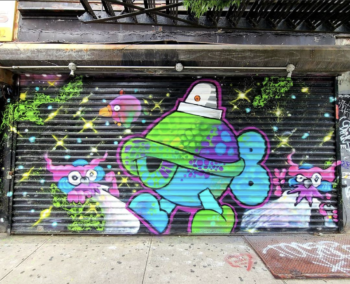 Belowkey: If there’s yellow tape there, then it’s legal right? 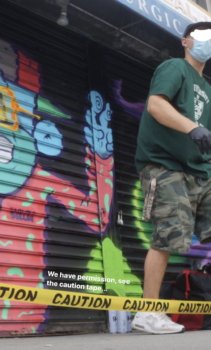 QAC: Ha ha, I completely agree. So the second time went off with no problems?

TurtleCaps: Well, not exactly. When we were almost finished, a guy jumps out of a pickup truck and starts screaming at me saying he’s the new owner, no permission, calling the police and all this stuff again. So I go into my whole cover-up mode talking about how we made a promise to the old owner that we would keep the gates graffiti free and that we saw NYPD was doing a whole buff program at the time. By the end of the conversation the guy was loving me and actually gave us his number in case the cops bothered us. Not sure why they always come over to me, but it worked out. It was classic because Silver Tuna captured the whole thing on film, from the guy raging to him appreciating what we were doing. Just by chance the cameras were rolling on me that particular moment. 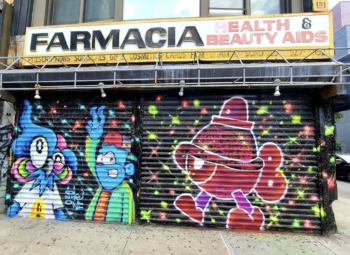 QAC: I really appreciate you guys giving us the low down on that spot. The new mural looks great and hopefully people have a better grasp of how much you all risked to pull that off ✌️ Photo credits to TurtleCaps, Lisascott3062 and in action pics by Bytegirl 🙏 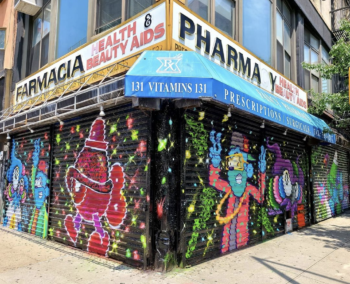